Marika Rökk and Germany's Race To Be The Most Glamorous in Film...

If you've never looked up any Marika Rökk, you really should. She was kind of like Germany's Eleanor Powell + Ginger Rogers. The woman could sing, tap dance, and act! The triple threat, she was the result of the UFA's (the principle film studio in Germany) drive to create a female star that would rival that of America's top Hollywood stars.

Born in Egypt to Hungarian/Austrian parents, she started her dance career with The Hoffman Girls at the Moulin Rouge in Paris. She also trained briefly on Broadway, eventually returning to Europe in the late 1920s. By the mid-1930s, the German government had her in their sight to become a new sensation, and by 1935 she was a household name.

At the time, Germany, and in particular the Third Reich's Minister of Propaganda, Joseph Goebbels, were looking to re-create the glamour and excitement of Hollywood musicals, but at home on German soil and with German language. Goebbels felt that Hollywood films presented a threat to Germany's film industry, and that the best way to combat the lust for American films was to create films that matched, if not exceeded the luxury and glitz with German-made musicals, starring an irresistible sweetheart of the screen, which they found in Marika Rökk. According to Wikipedia,

"Though few of her movies featured open Nazi propaganda, she fulfilled her task to embody a
leading woman in the Third Reich and to entertain the German people throughout World War II as intended by Joseph Goebbels. After the war, she initially received a Berufsverbot (profession ban), but was rehabilitated in 1947 and could continue her movie career in West Germany and Austria. In 1948 she was among the first recipients of the German Bambi media award. Rökk became one of Europe's most famous operetta singers, performing on stage until 1986. "

So, was Marika secretly a member of the Nazi party? She never claimed to be, and it appears she was most likely just a scapegoat and pawn:

Positioning herself as entirely non-political, she claimed allegiance only to art, laughter,

and entertainment. By the time Hitler rose to power, she was already a star, internationally acclaimed for her revue appearances in New York, London, Paris, and Monte Carlo. Her film career (launched in 1934), made her an idol for an entire generation - even after the war.

The Nazi regime was celebrity-crazy. It paid court to its "Aryan artists" and exploited their vanities. After the expulsion of the Jewish artists, it took stars like Marika Rökk, popular names, public endorsements and other such reassurances to prove that the German nation's entertainment industry and cultural achievements would continue under the Nazi swastika.

Excepting Zarah Leander, "the Rökk", as she was commonly referred to, was the most prominent female "morale booster" of the terrible war years. In a system that allowed no art without ideology, Rökk's upbeat cheerfulness became an invaluable contribution to both the regime and the people, not only on the home front but also in the theater of war. At her concerts, whether on the front or in the German cities suffering more and more bombings, Marika Rökk presented herself as a merry whirlwind even in the face of imminent defeat, offering an artistic sedative against the grim toll of the bombings and the shattered economy, particularly her revue films with their stereotypical and idealized world-view counteracted the grueling reality of the German war. These movies offered people their last escape into illusion.

After 1945, she suffered a brief fall from grace. Rökk hadn't appeared in any propaganda films. "So what did I have to pay for?," she asked rather rhetorically and bitter after she was banned from public appearances until 1948. Her inclusion on the black list, however, was quickly counterbalanced by her performances for the American occupying forces. Allegations that she had been a Nazi spy were soon dismissed, and a court of honor of the actors' union provided her rehabilitation. Her talent was independent of any political system or ideology. It wasn't just a Nazi dictator who loved her, but the Americans and Russians too, especially in the newly established democratic Austrian republic. She was, indeed, a star for all seasons and would soon divert her audiences again, this time from the daily routine under Allied occupation and life between the ruins left by the relentless bombings of war.

The clip I am presenting today is from a 1938 film of hers, "Eine Nacht im Mai", which translates to, "A Night in May". 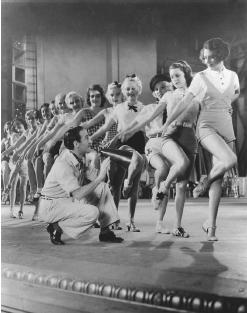